Halogen lights were once the standard in the world of cars. They were cheap, effective and lasted a long time.

In 1991, however BMW released the e30 – 7 Series with new technology Xenon headlights. Xenon lights also known as HIDs, appear to be a very similar set up for the halogen system. But hid example features a ball is filled with xenon gas and ametallic salt. When a current is passed through the electrodes the xenon gas amplifies the light and reacts with the salt to make a stable and bright light throughout. This results in lights around 2 or 3 times brighter than the equivalent halogen bulb and gives off a pure white blue glow as opposed to the often yellow color an equivalent halogen bulb. Color temperature is measured in Kelvin, and that’s what you often see tacked on to the end of an HID bulbs. Rating a little over 5000K is where the Xenon range usually begins with a white light and can range all the way up to 30,000 K with a deep purple blue. Despite needing a lot of power to warm up. Once warm, Xenon draw much less power than the equivalent halogen. The disadvantage to this though was that because Xenon’s need an immense amount of power to initially start up. They require the use of a ballast to help regulate the electric current and reduce voltage. Hence why you often see Xenon systems with bulky boxes behind the lights. Even though it’s a technology that was birthed in the early 90s, it’s still an option that finds its way onto premium cars and commands of premium in price.

Matrix multi beam or intelligent lights are something that you may have heard more and more about in recent years. Well, each manufacturer has a different name and slightly different technology behind it. The core purpose is still the same. A set of lights so smart that you never have to dip or dim your high beams, because the car knows when and where to do it. A camera mounted in the car analyzes the road ahead and looks for cars people and even road signs. Once it identifies that there’s something there, it sends a signal to the lights which in the case of the Audi a8 or a series of 32 LEDs. The LEDs can precisely tell where the beam of light will hit turning off or dimming the beam with up to sixty four stages of dimming in the area that hits the oncoming car, thus allowing you to keep driving with your high beams illuminating the road but also not blinding oncoming drivers. Even though there are developing technology, we’ve tested these systems and they work incredibly well. They’re smooth enough that you don’t even notice the lights going to work, while also letting you use your high beams even with traffic oncoming. 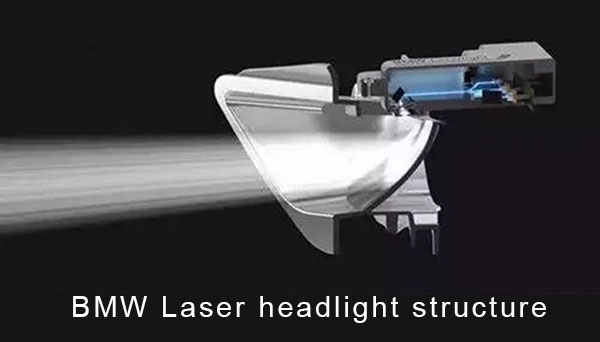 Laser light – a technology you may have heard more and more about in recent years. While many manufacturers are still testing their systems, costs such as the Audi r8, the new BMW 7-series already have them fitted, but surely it’s not as easy as a blindingly bright laser sitting in a headlight housing, right? in fact, there’s an incredibly clever system in those units, here’s how they work. A blue laser sits in the housing and shines forward onto a lens filled with yellow phosphorus. This converts that potentially harmful ray of laser light into a broad beam of intense white light that can be projected onto the road. In the case of BMW, this is taken one step further by directing three laser beams into mirrors which enter a prism. This combines into one beam, then goes through the yellow phosphorus, and then offer a reflector to the final beam. This results in an even safer friendly to the eyes beam that will still work incredibly well. The lights are some 30% more efficient than LEDs and could illuminate up to nearly 2,000 feet, around double laven LED equivalent. The downside, however is that most of these systems are significantly more expensive than LED lights which are in turn already about three times as expensive as Xenon’s.

So what do you think of these modern light technologies just expensive optional extras that blind other drivers, or an important leap forward in car technology?

This site uses Akismet to reduce spam. Learn how your comment data is processed.

Today, we can find many led headlights with different colors on the market. White, yellow,...

It is necessary to highlight several factors that you should pay attention to in order...

Some doubt that is driving with the driving at night and, on the other hand,...

In the accident figures year after year we see that a large percentage of fatalities...